When I heard that the gorilla permits in Rwanda will increase from 500 USD to 750 USD each, my first reaction was nausea. When I realized that nobody was commenting about the reasons for that increase and the benefits for the gorillas, my reaction was silence and depression. It is clear that my job is the messenger of the government, the person who collects the money for the permits from the clients and brings them to the cashier of the government, without asking any question (and only for a small margin of gain in salary). 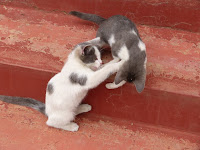 When my neighbor Peter in Mutungo - Kampala told me that in our compound there is a problem, which is the presence of cats, and when the second neighbor, Mugisha, all sharing the same compound with my, agreed with him about this, I told both of them that myself I had no problems with the cats, actually I told them that “the cats were here before you came and they have the same right to live here as you have”. Not only, while the cats were clean, my neighbors were actually littering all around the garden as if this was nothing for them.
They never talked to me again, which was a pleasure for me. Soon both of them left the compound, while the cats are still there and they are even happier, since the people who dislike them have gone. Moreover, the compound is cleaner, thanks God for the cats.
Only because animals cannot talk, and only for this reason, we sometimes believe to have the right to make decision over them, but this is not a right, it is actually an abuse.
When people surrounding Bwindi Forest are complaining about the presence of the gorillas, they should be told that the gorillas were there far longer before them and so, if they do not like them, they can go elsewhere, since the tropical forest is the habitat of the gorillas. The hypocrisy of those defending human beings, when human beings are millions and the gorillas are only 340, is the same hypocrisy that has spoilt the whole earth, bringing to extinction so many other species, the tigers, the bears to mention only 2 of them.
And who are theese human beings who should be defended? Human beings are often thieves, people without respect for other human beings, causing disasters, careless of anything, making wars and destruction. While the gorillas or the cats were just peacefully living in their habitat. The human beings are those who, shamelessly, killed many innocent gorillas, as well as they are poisoning the few remaining lions in Queen Elizabeth National Park or killing elephants in Murchison Falls National Park in 2012. These are the human beings, God could save us from them.
Only because the gorillas cannot talk, that is why the governments are making decisions over them without any consensus and without even benefits for them.
I would like to know if those who decided (those few people in the government) to increase the gorilla permits to 750 USD have also considered any implications for the benefits of the gorillas. Or maybe they have only considered how to make profit out of tourism, a language that the gorillas do not understand. And who is not so hypocrite that is planning for the benefits of the gorillas, which are only the protection and expansion of their habitat? There is no any or other serious discussion about defending the innocent gorillas from the predatory behavior of the human beings, but to talk about the protection and expansion of their habitat. Today, the few remaining 340 mountain gorillas of Uganda are facing the challenge of extinction, with the rampant deforestation around what is today Bwindi Forest, only 300 square kilometers of surviving forest. The gorillas are chased back to their small forest at any attempt they do to expand their compromised habitat by coming out to open areas. Gorillas cannot win a battle against the human beings, unless the human beings themselves understand their suffering. I doubt they can.

I am only the messenger of the government, the person who collects the money of the permits from the client and take them to the cashier. However, I am not a hypocrite messenger, I still have a conscience, I still have a feeling for justice and I know about injustice, because it is all around me. I am defending physically all the cats from the misery of human beings attacking them in the area of Mutungo, Kampala. My compound is “cat free”, yes, which means the only place where the cats are free, because elsewhere they are hated, beaten up, humiliated.
Thanks God for creating the animals, while the human beings are killing them in your name. While nothing is done to give a future to the gorillas, while some are only talking useless lies - the human beings, so proud -, maybe I am not only the messenger of the government, but I am also the messenger of the gorillas, until they will talk by themselves.
In the movie, “The raise of the Planet of the Apes”, at the end all people are flying away from New York because the chimpanzees have taken over the town making of it a real forest. At the moment, in the reality, we still see people flying away from their places to come here to see the mountain gorillas and chimpanzees here, but what exactly are you telling them about the conservation and the future of the gorillas? Only lies?
Thanks so much to Jane Goodall Institute, their staff and their courage. You are not hypocrite.
Costantino Tessarin
Destination Jungle
Posted by costantino tessarin at 7:05 AM