Well, Uganda has a number of cultural sites that are worth visiting because of their attractions accompanied with the interesting stories behind their existence. Normally, it is the in-depth cultural tourists that visit those cultural sites and they may also get to know about them when they want particular information. However, these sites can also be popular stopovers for all categories of visitors to a particular Safari destination where they are found or en route. Key Uganda’s cultural sites include the following: 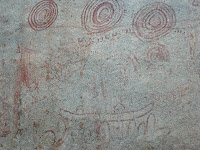 Nyero rock paintings in Eastern Uganda (Kumi district), are one of the most interesting cultural sites that are an early iron age innovation painted on three rock shelters each one painted with animal figures, sets of concentric circles and canoes. All paintings are done on rock faces for a clear vision as shown in the picture. 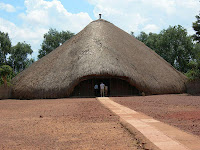 The famous Kasubi tombs that are currently under re-construction due to the fire that it suffered on 16th March 2010 hold a strong spiritual and social attachment to the Ganda people.  It is the main burial ground for the kings of Buganda since time immemorial; its architecture was also based on Buganda’s cultural beliefs as shown in our picture. Even though it was burnt down, the remains of the buried kings survived the fire and are still intact. It’s located along Kampala-Hoima road in kasubi trading centre.

Uganda also has a series of cultural tombs that have cultural attachments specifically for the Baganda people. These tombs are namely;Namasole Baagalayaze tombs, which houses the  body of king Mwanga’s mother  Baagalayaze found along Kampala-Gayaza road 15km from the main centre,Namasole Kanyange tombs that are the burial grounds of the mother of king Ssunall and other subsequent Namasoles of Buganda  located along Kampala-Bombo road 12.5km from the main centre,Wamala tombs that are the burial ground of king Ssuna who had 148 wives and 218 children and who was the last of kings to have his jaw bone removed after his death located in Wamunyenye in Nansana along Kampala-Hoima road. 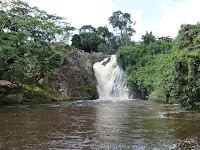 There is also the famous Sezibwa falls (shown in the phograph) that are believed to have been born by a woman named Nakkungu Tebatuusa whose husband was called Nsubuga Sebwato. These two gave birth to twins named Sezibwa and Mubeya. Sezibwa has its main source in Buikwe from a spring and the falls are about 7m high.
This cultural site is a favorite for traditional healers who perform cultural ceremonies for people who seek their help.Its located in Mukono district approximately 32km East of Kampala.

Naggalabi coronation site in Buddo (Wakiso district) is also one of Uganda’s cultural sites where all the kings of Buganda have been crowned for the last 700 years from the first king (Kintu) who killed his brother Bemba and declared himself  king from the same place. The site also houses the Buganda house where the crowned king is supposed to live for 7 days and perform all the cultural ceremonies assigned to each day. 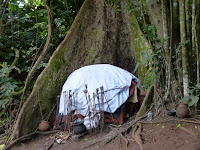 Nakayima tree; a pterygota mildbreadii specie (fig) that gets its name from a hereditary line of sorceresses of direct descent from Nakayima, Ndahura’s wife who used to get possessed by Ndahura’s spirit making her his medium is a famous cultural site to the Baganda and Banyoro because of its attachments to their cultures. Its a cultural centre with various activities taking place all year round and it’s found in Mubende district in a small village of Bomaire 2km from Mubende town.

There are also the  Ntusi and Bigobyamugenyi sites in Masaka town that are associated with  the legendary Bachwezi who dug the basin and trenches that connect to each other by cause ways, the manmade mounds of ash and bones that also exist at the site make it worth visiting.

There’s also the Nsongezi rock shelter a Stone Age site located along river Kagera in Isingiro district which has pottery that was made by the Stone Age men.

Amabere ga Nyina mwiru are also other cultural sites found in Uganda. These are caves which were named after Nyinamwiru the daughter of Bukuku of the Chwezi Kingdom. It is believed that the Nyinamwiru was not supposed to get married or give birth until her father had told so or has got her a man. However to the surprise of King Bukuku, Nyinamwiru got a man without his consent and as a result, he cut off his breasts. The place where he threw these breasts is where this cultural site is found. The breasts are believed to have grown into rock dipping with Milk or breast like features called stalactites and stalagmites.
Posted by costantino tessarin at 3:54 AM